agedu scans a directory tree and produces reports about how much disk space is used in each directory and subdirectory, and also how that usage of disk space corresponds to files with last-access times a long time ago.
In other words, agedu is a tool you might use to help you free up disk space. It lets you see which directories are taking up the most space, as du does; but unlike du, it also distinguishes between large collections of data which are still in use and ones which have not been accessed in months or years – for instance, large archives downloaded, unpacked, used once, and never cleaned up. Where du helps you find what's using your disk space, agedu helps you find what's wasting your disk space.

So you would typically start using agedu by telling it to do a scan of a directory tree and build an index. This is done with a command such as

That URL will always begin with ‘127.’, meaning that it's in the localhost address space. So only processes running on the same computer can even try to connect to that web server, and also there is access control to prevent other users from seeing it. 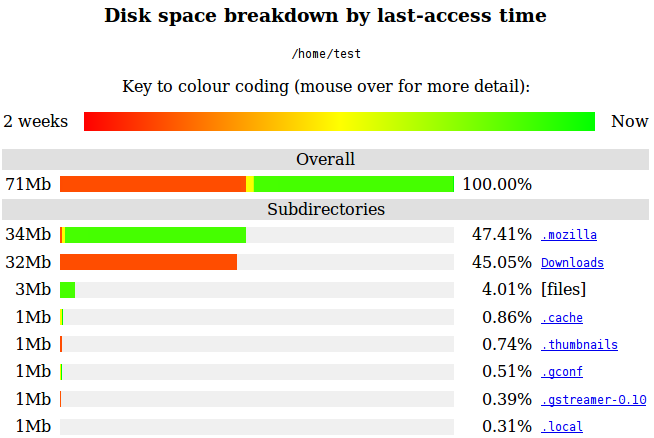 for a single self-contained run of agedu which builds its index, serves web pages from it, and cleans it up when finished.

If you don't have a graphical web browser, you can do text-based queries as well. Having scanned /home/test as above, you might run

which again gives a summary of the disk usage in /home/test and its immediate subdirectories; but this time agedu will print it on standard output, in much the same format as du. If you then want to find out how much old data is there, you can add the -a option to show only files last accessed a certain length of time ago. For example, to show only files which haven't been looked at in six months or more:

That's the essence of what agedu does. It has other modes of operation for more complex situations, and the usual array of configurable options. The following sections contain a complete reference for all its functionality.