MyNotex – A free note-taking and notes manager software for Linux

MyNotex is a free software for Linux useful to take and to manage textual notes, also a large number of them. Notes are gathered under different subjects and are made by a title, a date, a tags (keywords) list and a free-length plain text; up to the present version of MyNotex, this cannot be formatted (no italic, bold, etc.), but the software can manage bullets and numbered lists, although without automatic indentation. A single file of MyNotex contains various subjects and notes.

The main features of the software are:

* various attachments (files of every kind) for each note, zipped and stored in a directory with the same name and path of the MyNotex file in use and automatically managed by the software; the number of attachments is limited only by the available disk space;
* search for subjects and notes (also in the text) and for tags (keywords);
* moving a note from a subject to another;
* importation and exportation of single subjects with the related notes and attachments from and to another file of MyNotex;
* direct importation an OpenOffice Writer file;
* export data in HTML format, which can be easily opened with a word processor like OpenOffice Writer.

Finally it is possible to synchronize two different files of MyNotex so that the new, the changed and the deleted subjects, notes and attachments in each one of them are mirrored in the other; at the end of the process, the two files and attachments directories are identical. This feature allows to modify two or more files of MyNotex offline and then connect to the LAN or the Internet and synchronize them, also through a cloud services like Dropbox or Ubuntu One.

download .deb packages from here once you have deb packages you can install them by double clicking on it. 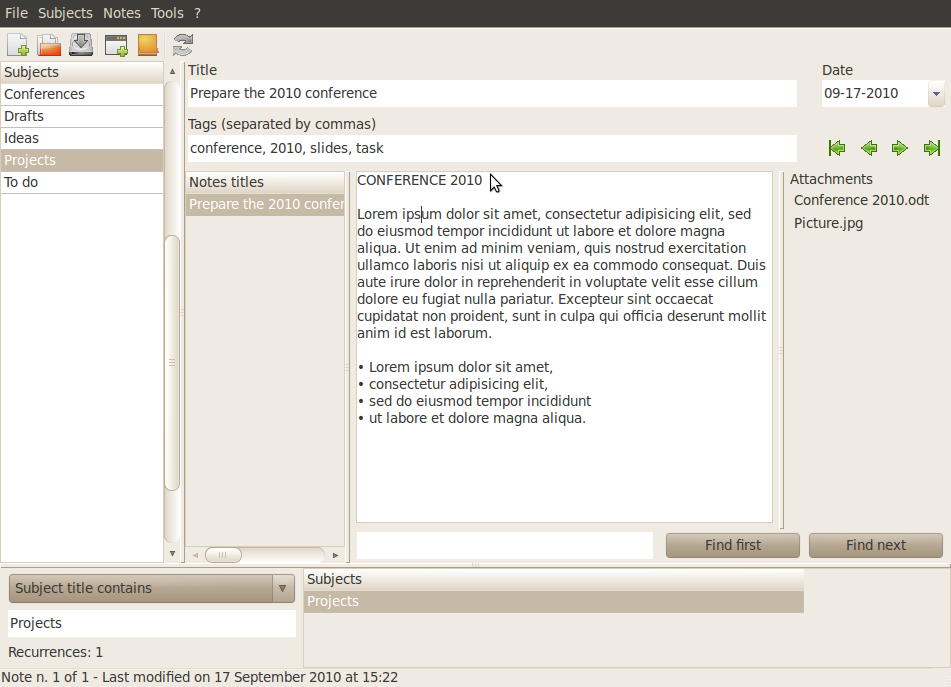