Next Version of Ubuntu Tweak 0.6 Mockup

Ubuntu Tweak is an application designed to config Ubuntu easier for everyone.It provided many usefull desktop and system options that the default desktop environment isn’t provided.At present, It is only designed for Ubuntu GNOME Desktop, and often follows the newest Ubuntu distribution. 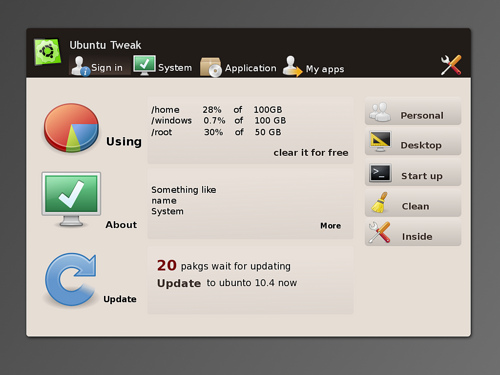 How about the new design?

There will a new toolbar to switch between main category of functions, and the sub-functions will locate at the right-sidebar.

Because the Ubuntu Tweak will support plugin management (The “My Apps” in pictures). As the development going on, I found that there’s always a lot of features need to be development, why not design a plugin-system to let other developers to develop various kinds of features? So I can focus on the core part, and make Ubuntu Tweak more and more powerful and flexible. That’s the point of  Ubuntu Tweak 0.6.

As you see, there’s “Sign in” in the interface, it means Ubuntu Tweak will have full-featured network ability. It is still under discuss.

And the Welcome page  will be replaced by some of the status of your system, you can get the overview of your Ubuntu!