periscope is a subtitles searching module written in python that tries to find a correct match  for a given video file. The goal behind periscope is that it will only return only correct subtitles so that you can simply relax and enjoy your video without having to double-check that the subtitles match your video before watching it.

This is done by using as much info as available from your file and on the websites. Some websites allow you to use hash of the files, the size/length of the video or the exact file name.

As a python module, periscope should be easily integrated in many projects that allow plugins to be written in python. The fact that the plugin is shared between all the applications means that separate application and their plugin (file browser, video player, media center application, ...) don't have to maintain the code to search, parse and download subtitles and the user preference about languages.

The subtitles websites are handled as plugins and currently support :

A Nautilus plugin exists to integrate periscope in Nautilus.

Copy the periscope-nautilus.py script into the ~/.nautilus/python-extensions.Now open the terminal and run the following comamnds

If you want to change the default languages, run periscope once, a file named "config" will be created under ~/.config/periscope. Update this file to reflect your prefered languages. They can be separated by comas, so:

are valid. The first one saying that you want to search subtitles in english, the second, in english and if not found, in french.

Restart nautilus otherwise it does not take into account the newly added scripts by typing in a terminal nautilus -q
Open nautilus and go to a location where you have video files. Right-click on a video and wait for the notification to see if a match was found. 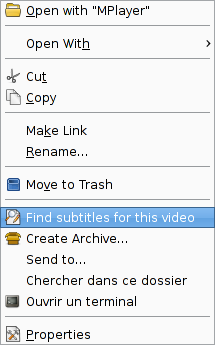