After lot of time spent to learn the cinelerra code, I want to move an other step on the opensource contribute. I'm started from tangolerra project made by Franco Iacomella and after an hard job with svg I made my personal mochup of Cinelerra called Cutiehd. But when I started to work on the mochup of Cinelerra 2.1cv I tryed to enable again the support of font antialias (xft), write a draft of Utf-8 support, rewrite some parts of titler code and adapt the svg plugin from the Cinelerrasv by "Simeon Völkel". I know that these features can generate instability, so I decided to make a new package with it's name and icon called Cinecutie, that can be consider more as "mochup" than a real "fork". In order to make possible the installation with cinelerra I had to rename not only name but also libraries and settings dir (from ~/.bcast to ~/.ccutie).

First you need to download and install developer repository .deb file from here or using the following command. This package detects your version of ubuntu, installs and keeps akirad repository updated.

If you are using karmic click on the following link 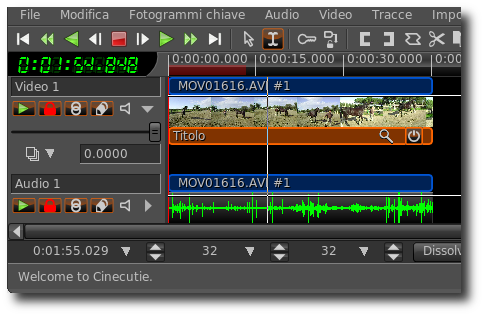 2 thoughts on “Cinecutie – New Video editor and composer for Linux”