Clementine is a multiplatform music player. It is inspired by Amarok 1.4, focusing on a fast and easy-to-use interface for searching and playing your music.

* Add transcoder options.
* Display album art from FLAC tags if using a version of taglib that
supports it.
* Rename the existing "Shuffle by album" mode to "Shuffle tracks in this
album", and add a new "Shuffle albums" mode that plays all the tracks in
each album sequentially, but then jumps to a different random album
afterwards.
* Improve the organisation of the settings dialog.
* Add scroll bars to the settings dialog if it's too big to fit on the
screen.
* Improve the settings dialog pages for online services like Last.fm to make
it easier to log in and log out.
* Add a warning about not being able to play Last.fm radio if not a
subscriber.
* Group album cover search results by category.
* Allow the artist and album to be specified separately when searching for
album covers.
* Made album cover art searches more clever -- they will select the "best"
image automatically rather than just choosing the first one.
* Show some statistics after searching for album cover art.
* Show the album cover dimensions on each image when searching for art.
* Support dragging and dropping images onto the cover in the edit tag
dialog.
* Double clicking a playlist tab now lets you rename it.
* Add keyboard shortcuts to navigate between playlist tabs.
* When songs are added to the end of the playlist, scroll the playlist to
ensure the top one is visible.
* Make dynamic playlists use the limit specified in the smart playlists
dialog.
* Add an "Expand" button to add more tracks to a dynamic playlist.
* Make it possible to use relative dates in smart playlist criteria.
* Add an option to remove the playlist background image.
* Add options to customise OSD messages that are shown on song changes.
* Add a button in the status bar to toggle Last.fm scrobbling.
* Show a song's URL in the title playlist column if it doesn't have a title.
* Add a new logging system.
* Add file type filtering to the Files view.
* Add a --version command line option.
* Add a --toggle-pretty-osd command line option.
* Add support for custom lastfm:// URLs.
* Make the version number in the About dialog selectable.
* Elide the hint text in search boxes when it's too long.
* Show the artist and album name in the title of the "Show fullsize" window.
* Remember which tab was selected last time in the edit tag dialog.
* Cache lists of streams/friends fetched from Last.fm, di.fm, soma.fm, etc.
* Improve handling of album artist tags.
* (Mac OS X) Make the album cover search dialog modal so it acts like a
sheet.

* Put a limit on the size of the playlist's undo stack and don't record
operations that affect more than 500 rows. Reduces memory usage when
adding or removing lots of items to the playlist.
* Buffer audio from all sources, not just http. Fixes audio stuttering when
playing from mounted network locations.
* When adding files to the playlist that aren't in the library, quickly add
playlist entries first and then load more metadata in the background.
* Scrobble radio streams even when the length is unknown.
* Re-enable the Last.fm Love button after going to another song in a stream.
* Scrobble tracks properly if they're loved before the half-way point.
* Fix a bug that would sometimes cause the wrong songs to be scrobbled.
* Fix a bug where a song's play count would be updated continuously if
scrobbling was disabled.
* After deleting an item from a playlist move the selection to the next item
instead of the previous one.
* Translate dynamic playlist names properly at runtime.
* Fix a crash on startup if the album cover loader took too long to start.
* Show tooltips in the sidebar only in Tabs and Icons Only modes.
* Fix the byte order of album cover art images sent over dbus on big endian
machines.
* When songs disappear from the filesystem, mark them as unavailable instead
of completely removing them from the database.
* Read album artist tags from ogg/flac/mp4 files properly.
* Make the --pause command line option always pause, instead of behaving the
same as --play-pause.
* Fix a crash when clicking on the "Smart playlists" folder when the library
grouping is set to None/None/None.
* Keep the state of the rain and hypnotoad menu items in sync.
* Fix a bug where playlist columns would slowly change size the more times
you opened and closed Clementine.
* Save the state of the playlist columns' sort order.
* Assume Icecast-style stream metadata is in the "Artist -- Title" format,
as this seems more common than "Title -- Artist".
* Preserve high quality (>16-bit) audio streams.
* Stop the M3U parser from going into an infinite loop when parsing a file
with an invalid #EXTINF line.
* When renumbering tracks, number the first track 1 instead of -1.
* Fix a bug where notifications would be shown for the wrong song after
editing file tags.
* When organising files, make %albumartist behave like %artist if the
song has no albumartist tag set.
* Use locale-aware sorting for artists and albums in the album cover
manager.
* When stopping due to "Stop after this track", set the current song to the
one after, so when the user presses Play it plays the next song instead
of the last one again.
* Fix a bug that stopped Magnatune album downloads from working.
* Improve detection of playlist types when loading a playlist smaller than
512 bytes.
* Fix Last.fm authentication on Qt 4.8.
* Save the playlist column alignment setting properly.
* Indicate which playlist column alignment is currently in use in the menu.
* Speed up adding entire folders to the playlist from disk.
* Load cover art for the library in a background thread. This makes opening
nodes with a large number of albums much faster.
* Make manual track changes ignore the "Repeat track" setting
* Use MP3 URLs for Jamendo instead of Ogg since they keep breaking the Ogg
ones.
* Fix a crash when asked over DBus or the commandline to play a track in the
playlist that doesn't exist.
* Fix a bug where moving songs down in the playlist could not be undone
properly.
* (Linux) Fix device detection using DeviceKit.
* (Linux) Recognise iPods correctly when using GIO.
* (Linux) Work around an NVIDIA driver bug that would cause Clementine to
use 100% CPU on exit.
* (Gnome 3) Register for media key notifications properly.
* (Gnome 3) Run the new gnome-control-center command to open the keyboard
shortcuts dialog.
* (Ubuntu) Add Clementine to the Unity system tray whitelist on startup.
* (Ubuntu) Don't use Unity's global menubar.
* (OpenBSD) Fix compilation errors in projectm.
* (Mac OS X) Fix free space and capacity information for MTP devices.
* (Mac OS X) Disable the popup delay settings when using Growl.
* (Mac OS X) Blacklist certain USB devices from MTP probing.
* (Mac OS X) Fix global shortcuts in Lion.
* (Mac OS X) Fix native search widgets in Qt 4.8.
* (Windows) Fix an occasional crash when connecting devices.
* (Windows) Fix a bug where filenames containing unicode characters could
not be transcoded.
* (Windows) Close transcoded files after writing them.
* (Windows and Mac OS X) Use a git build of taglib to fix a crash when
loading malformed ID3v2 tags.

You can download .deb package from here once you have deb package you can install by double clicking on it 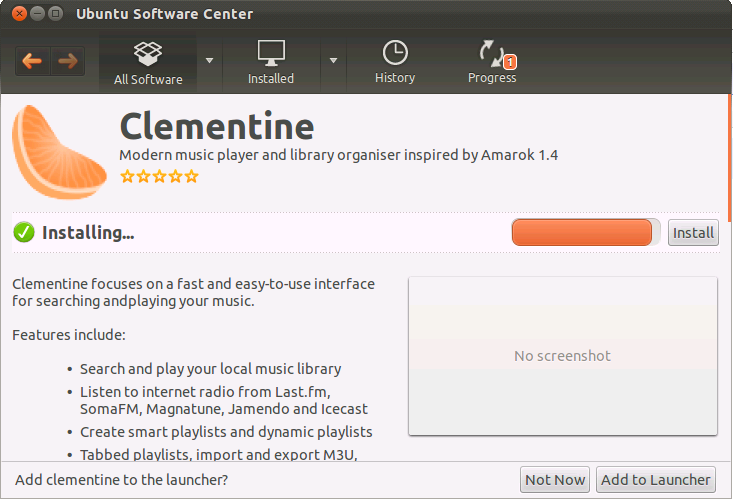 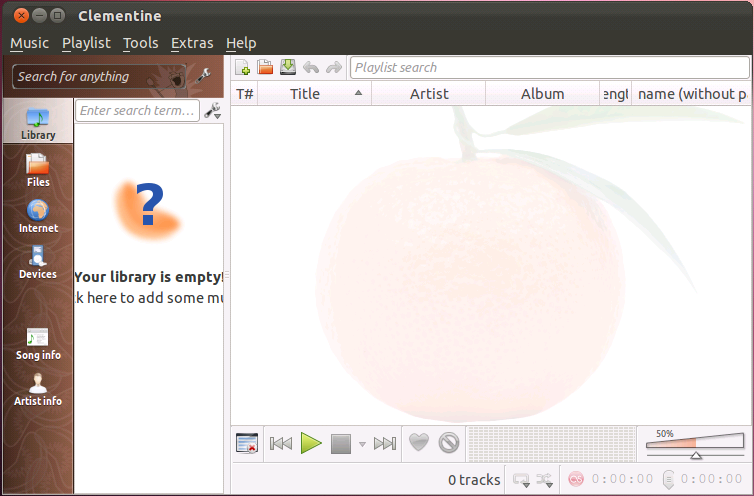 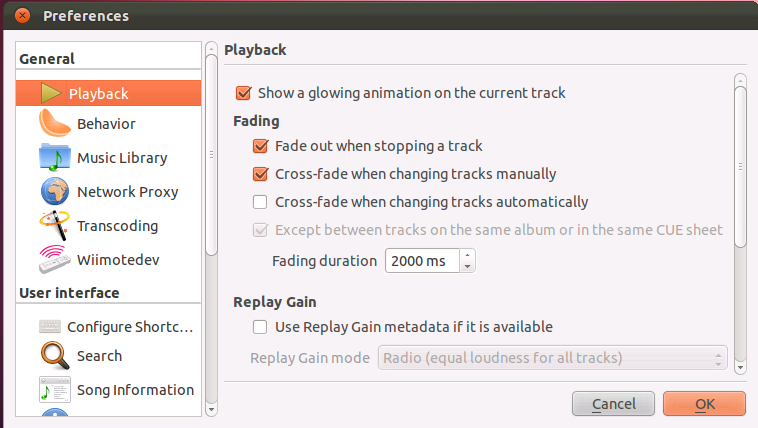 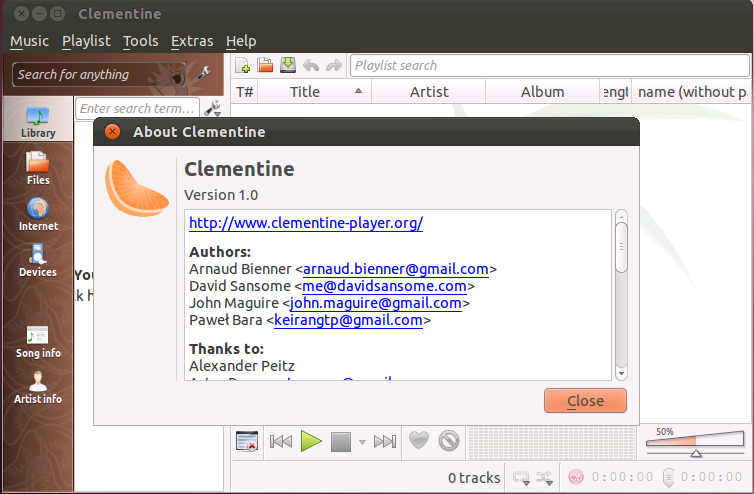