Do you have a dual boot system? Isn't it annoying when you want to reboot from Linux into Windows or vice-versa, and you have to wait for the machine to shut down, the BIOS to initialize just so that you can now select the OS that you want to boot into?
grub-choose-default gives you a GUI that you can use to easily select the next default for grub and you can go and grab a snack while your computer reboots without having to wait for anything.

It's a very simple program that just reads your grub menu entries and then lets you click on the one you want to be the next default.

Since grub2 reached version 1.98, setting the default boot entry through the "grub environment" is supported. From Linux, the grub-set-default command is available again, just as before with grub-legacy. Under Windows grub's code is used to edit the environment directly.

grub-choose-default is available both for Linux and Windows. It should also work on other Unices, but has not been tested (user reports are welcome).

Under Linux it reads /boot/grub/grub.cfg and sets your choice using grub-set-default.

Under Windows you need to get access to your Linux /boot. If you are running ext2/3, then you can use Ext2IFS, which gives you access to your ext2/3 partitions as regular drives under Windows. grub-set-default currently needs this and thus does not work with /boot on reiserfs or other filesystems (unless someone can point me to a similar FS driver as Ext2IFS).

Most of the time you will want to reboot after setting the new grub entry. How to end a session is specific to the desktop environment in Linux, and in the reboot/ directory are example scripts of how to end a session. The user can install the script of his choice in $XDG_CONFIG_DIR/grub-choose-default/reboot. 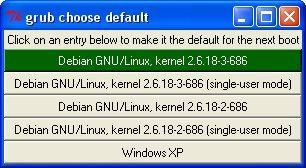