How to install Edubuntu Menu Editor in Ubuntu lucid/Karmic

The Edubuntu team has been discussing the need of a tool to filter the list of applications displayed to a user depending on various criterias. We first implemented it as a set of meta-packages called application bundles and prefixed ubuntu-edu-* though we then noticed that it doesn't always apply to all countries.
Each country and possibly region/school district has its own rules on what kind of software should be available to which grades. In order to fix that, the following specification has been written and will be discussing the development of a tool used to easily create new menus that will be put on top of the main Edubuntu menu and filter it.

The interface will basically let the administrator define new menus by selecting the entries he wants and these he doesn't, then create new menus/sub-menus and finally save that as a standard XDG menu file. Then, another interface will be used to assign menus to system groups.

A way to easily import and export these menus will also be provided along with a package providing sample menus provided by some of our partners (Guadalinex, Qimo, Revolution Linux, ...).

The Edubuntu project has introduced a new tool called the "Edubuntu menu editor" that allows administrators to easily define new menus and use them to filter the list of application a user can see.

The matching is done using groups and menus can easily be imported and exported. This new functionality is available from the menu and profile editors under System Administration menu.

* The menu editor itself in Applications => System Tools => Menueditor

The first can be run by any user, it shows you a window like this one: 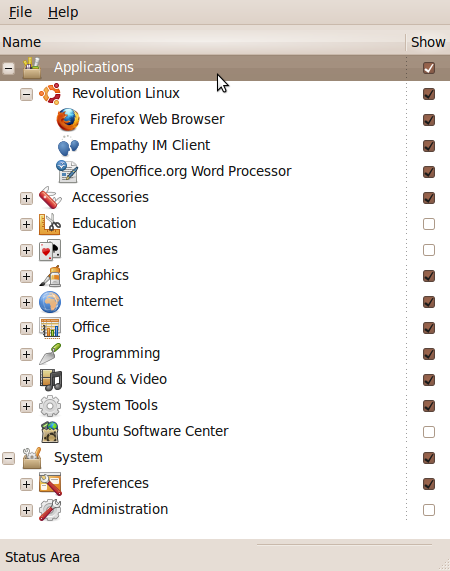 There you can create new sub-menus, copy items in them and hide items from the existing menu. Then save it (as a .tar.gz archive).

With this archive, you can either share it with your friends/colleagues/general community or directly start the Profile manager to import it and assign it to a group.
On login, all users in that group will see that new menu you assigned them. 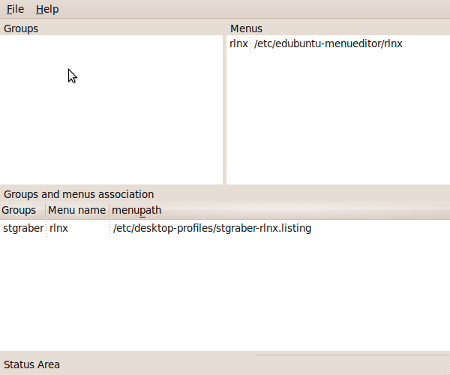