Ubuntu developers are currently developing a centralised “App Store” to simplify the dding/removing /updating/configuring of software within Ubuntu.The name of this application called "Ubuntu App Centre"

The Ubuntu Software Store will be a single graphical interface for package management in Ubuntu. In version 1, it will take the basic philosophy of Add/Remove Applications and make it even easier to use. In later versions it will grow to replace Synaptic, gdebi, some parts of the Computer Janitor, and possibly Update Manager. Having a single interface will make handling software easier, socially improve security, hopefully free space on the CD, and provide a prominent showcase for Ubuntu and partner software. The implementation is based on Add/Remove Applications (gnome-app-install), but may use PackageKit for some components.

The team behind it have set out a preliminary road map for the development of an Ubuntu ‘App Centre’ that stretch over the next four releases. (9.10 –> 11.04 ) with the full replacement the current Package Management tools by App Centre being introduced during 10.04 and refinement/new features being added to it after that.

1 Include in Ubuntu 9.10 a simple and fun interface for finding, installing, and removing software. This will likely involve:

* A highly graphical “main entrance” or “front page”, that allows browsing software by category and subcategory, and perhaps includes featured and/or popular applications.

* Attractive, informative, and easy-to-understand presentation of individual software packages within the interface (with this presentation also being used for apt: URL links to graphical applications).

* Interactive demonstration of how to launch the software you’ve just installed.

* The ability to continue browsing available software, and queue up installation/removal requests, while other changes are being made.

* Better security than the current installation mechanism (i.e. use of PolicyKit instead of gksudo).

2 Increase use of apt: links by Ubuntu enthusiasts, software projects, and ISVs, replacing terminal commands or standalone downloads. This will likely involve:

* A redirector Web service (e.g. redirecting from http://apt.ubuntu.com/package-name to apt:package-name), with helpful handling of error cases, to better cater for people who are not running Ubuntu when they follow the link (and to better cater for forums and other CMSes that do not allow direct apt: links).

* Prominent and highly understandable information on ubuntu.com about how to get your software (whether Free or non-Free) packaged for Ubuntu.

* An apt: evangelism campaign for projects that already have their software packaged in the Ubuntu repositories.

3  Fine-tune the interface presented when software updates are available. This may involve:

* When updates are presented automatically, collapsing the list of updates by default, concentrating instead on the existence of updates and the choice to install them now or later.

* Presentation of the new better descriptions of security updates.

4  Establish a system within Launchpad for registered users to suggest a better description, category, keywords, and/or screenshot for a software package, and for the package maintainer to incorporate those changes into a new version of the package, so that end users can find the software more easily later.

Below are some ‘mock-up’s taken from the ‘App Centre’ wiki page which show the first glimpses (subject to user approval)  at what the unified centre may look like. 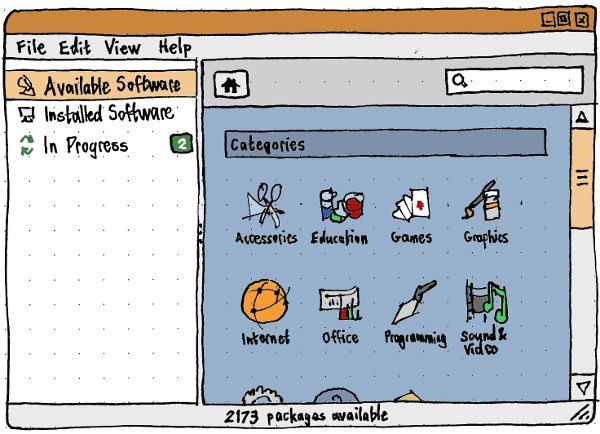 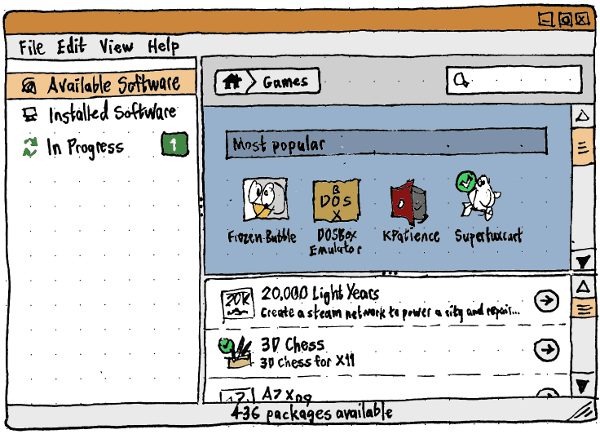 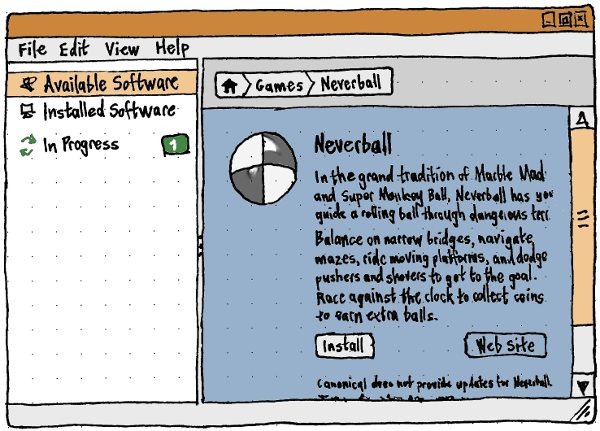 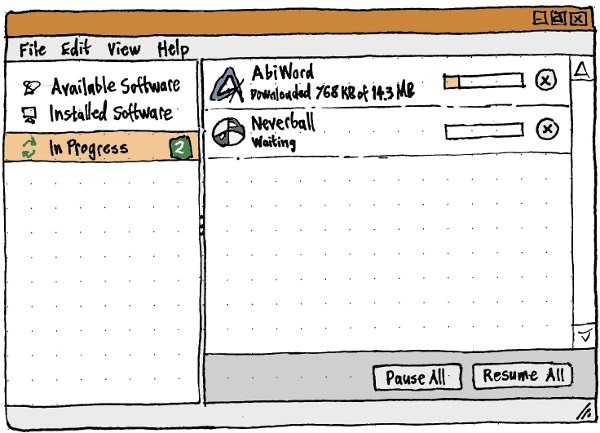 You can check the progress of this application on Ubuntu wiki page from here and here .I hope this would help more and more people to move back to ubuntu.