The Ubuntu operating system has been adapted to run on smartphones.The Linux-based software will allow users to run desktop apps on their handsets, allowing them to double for PCs when docked to monitors.

The code will initially be released as a file which can be installed on Samsung's Galaxy Nexus phone, replacing Android.

Some analysts question whether consumers really want the power of a fully fledged computer on their phone.

Even so, Ubuntu's founder, Mark Shuttleworth, said he was in talks with manufacturers for devices to be sold with the system pre-installed within the year.

While he acknowledged the innovation would likely be limited to "enthusiasts and hobbyists" at first, he said it signalled a wider shift on the horizon.

"It's quite incredible that we're at this point when the power of the phone is crossing over that with baseline processing power of basic laptops," Mr Shuttleworth told the BBC.

"We're taking advantage of that so for the first time in history you have the full consumer PC platform available on a phone.

"I'm very confident if we look ahead over the next three to five years that's a transition that Apple is going to have to make... and if it's not Windows 9 it will be Windows 10 that will see Microsoft bring its phone and laptop together into one device. It's really cracking to do that ahead of everyone else."

Phones running the software will be showcased at the Consumer Electronics Show (CES) in Las Vegas next week. 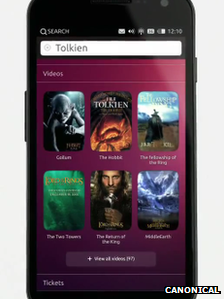 Ubuntu is the most popular operating system to be based on the Linux kernel -- the code that lets software and hardware work together.

The London-based firm behind it, Canonical, offers it for download free of charge and has been helped by thousands of volunteers who contribute to the open source project.

The firm makes money back by offering support and training and also plans to take a share of sales from online marketplaces offered by handset makers who adopt its software.

It estimates that more than 20 million PCs already use it.

In many cases these are older machines which benefit from the fact it is less demanding on computer power than Windows -- and is virus-free.
Media store Canonical says it will take a cut of sales from manufacturer's stores

The new version has been designed to work on last and current-generation Android handsets which share the Linux kernel. This means Ubuntu can re-use existing software drivers to control the hardware.

There are already 45,000 native apps for the system -- albeit with several notable omissions such as Adobe's Photoshop and the Office suite, although alternatives do exist.

Developers will be urged to adapt their apps' interfaces to look different when running on a phone's screen while offering the same core functionality.

Mr Shuttleworth suggested this meant many app makers would be familiar with the technology.

When running on phones Ubuntu can be controlled by the "head-up display" (Hud) option it introduced last year.

This allows users to type or say what command they want a program to carry out rather than having to click through menus.

"The Hud was born out of the phone design process," revealed Mr Shuttleworth.

"The key question we were asking is how do we allow developers to express some of the deeper richer functionality that you get typically in a desktop application when they write for a phone.

"Typically phone and tablet applications are streamlined slimmed-down versions of stuff that might have existed in a more sophisticated complicated form on the PC.

"And in our world where all of the functionality is there... you can invoke the Hud on the phone and talk to it with voice recognition instead of typing in your command -- so you could say [for instance] you want a photo in a 1930s style -- and our R&D effort is to make that natural."
Unconvinced about convergence

A version of the code will shortly be made available to developers to start adapting their apps.

The firm then plans to release a file for Galaxy Nexus phones by February, and later for other handsets and ultimately tablet computers as well.
Ubuntu on smartphones Manufacturers can adapt the look of Ubuntu's interface to suit their brands

One analyst suggested the news would raise awareness of the Ubuntu system, but was sceptical about its chances of success.

"It's an impressive move by Ubuntu but ultimately I don't think it's a smart move," said Chris Green, principal technology analyst at Davies Murphy Group Europe.

"They are not the first company to try and drop a desktop operating system on a mobile device and nobody has ever been able to make it work. Microsoft tried to foist something that looked and felt like normal Windows on a mobile phone and they had to screw it up and develop a separate phone system.