Codenamed “Wily Werewolf”, 15.10 continues Ubuntu’s proud tradition of integrating the latest and greatest open source technologies into a high-quality, easy-to-use Linux distribution. The team has been hard at work through this cycle, introducing new features and fixing bugs.


Ubuntu Server 15.10 includes the Liberty release of OpenStack, alongside deployment and management tools that save devops teams time when deploying distributed applications – whether on private clouds, public clouds, x86, ARM, or POWER servers, or on developer laptops. Several key server technologies, from MAAS to juju, have been updated to new upstream versions with a variety of new features.

Ubuntu 15.10 will be supported for 9 months for Ubuntu Desktop, Ubuntu Server, Ubuntu Core, Kubuntu, Ubuntu Kylin along with all other flavours.

Open the "Software & Updates" Setting in System Settings and Select the "Updates" tab.Set the "Notify me of a new Ubuntu version" dropdown menu to "For any new version". 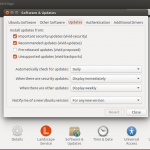 Press Alt+F2 and type in "update-manager" (without the quotes) into the command box. 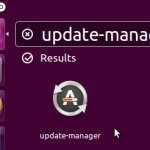 Update Manager should open up and tell you: New distribution release ‘15.10' is available. 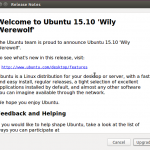 Install the update-manager-core package if it is not already installed and Make sure the /etc/update-manager/release-upgrades is set to normal.

Launch the upgrade tool with the following command

Note that the server upgrade will use GNU screen and automatically re-attach in case of dropped connection problems.

There are no offline upgrade options for Ubuntu Desktop and Ubuntu Server. Please ensure you have network connectivity to one of the official mirrors or to a locally accessible mirror and follow the instructions above.