We have already discussed Cleaning up a Ubuntu GNU/Linux system and this tutorial is updated with new ubuntu versions and more tools added.


If you want to clean your ubuntu machine you need to follow these simple steps to remove all unnecessary junk files.

This is yet another built-in feature, but this time it is not used in Synaptic Package Manager. It is used in the Terminal. Now, in the Terminal, key in the following command

Then enact the package clean command. What this commnad does is to clean remove .deb packages that apt caches when you install/update programs. To use the clean command type the following in a terminal window:

For this we need to install localepurge.Automagically remove unnecessary locale data.This is just a simple script to recover diskspace wasted for unneeded locale files and localized man pages. It will automagically be invoked upon completion of any apt installation run.

After installing anything with apt-get install, localepurge will remove all translation files and translated man pages in languages you cannot read.

If you want to configure localepurge you need to edit /etc/locale.nopurge

This can save you several megabytes of disk space, depending on the packages you have installed.

I am trying to install dicus using apt-get

after end of this installation you can see something like below

If you want to remove orphaned packages you need to install deborphan package.

Open Your terminal and enter the following command

GtkOrphan (a Perl/Gtk2 application for debian systems) is a graphical tool which analyzes the status of your installations, looking for orphaned libraries. It implements a GUI front-end for deborphan, adding the package-removal capability. 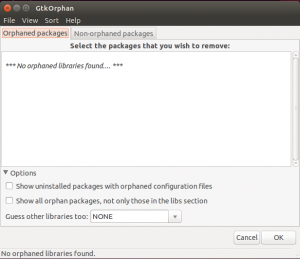 simplified Debian package management front end.Wajig is a single commandline wrapper around apt, apt-cache, dpkg,/etc/init.d scripts and more, intended to be easy to use and providing extensive documentation for all of its functions.

With a suitable sudo configuration, most (if not all) package installation as well as creation tasks can be done from a user shell. Wajig is also suitable for general system administration.A Gnome GUI command ‘gjig' is also included in the package.

Debfoster --- Keep track of what you did install

debfoster maintains a list of installed packages that were explicitly requested rather than installed as a dependency. Arguments are entirely optional, debfoster can be invoked per se after each run of dpkg and/or apt-get.

Alternatively you can use debfoster to install and remove packages by specifying the packages on the command line. Packages suffixed with a --- are removed while packages without a suffix are installed.

If a new package is encountered or if debfoster notices that a package that used to be a dependency is now an orphan, it will ask you what to do with it. If you decide to keep it, debfoster will just take note and continue. If you decide that this package is not interesting enough it will be removed as soon as debfoster is done asking questions. If your choices cause other packages to become orphaned more questions will ensue.

to create the initial keepers file use the following command

you can always edit the file /var/lib/debfosterkeepers which defines the packages you want to remain on your system.

to edit the keepers file type

To keep track of what you installed additionally do once in a while :

xdiskusage -- Check where the space on your hard drive goes

Displays a graphic of your disk usage with du.xdiskusage is a user-friendly program to show you what is using up all your disk space. It is based on the design of the "xdu" program written by Phillip C. Dykstra. Changes have been made so it runs "du" for you, and can display the free space left on the disk, and produce a PostScript version of the display.xdiskusage is nice if you want to easily see where the space on your hard drive goes. 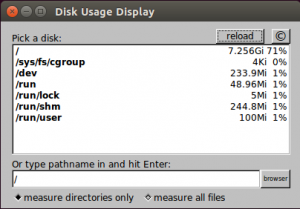 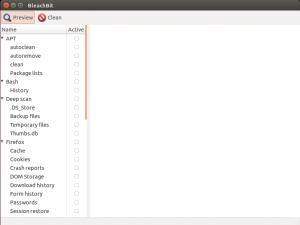 You can also Use Ubuntu-Tweak To clean up your system