Driftnet – Picks out and displays images from network traffic

Driftnet watches network traffic, and picks out and displays JPEG and GIF images for display. It is an horrific invasion of privacy and shouldn't be used by anyone anywhere. It has been described as ‘a graphical tcpdump', ‘EtherPeg for Unix. It is also possible to use driftnet to capture MPEG audio data from the network and play it through a player such as mpg123.Images may be saved by clicking on them.

-v -- Print additional details of packets captured to the terminal.

-i interface -- Listen to packets on interface. By default, driftnet will try to pick up traffic on all interfaces, but this does not work with all versions of pcap(3); on such systems, an interface must be specified. On some systems, driftnet can only use promiscuous mode if an interface is specified.

-p -- Do not put the interface into promiscuous mode.

-a -- Operate in ‘adjunct mode', where driftnet gathers images for use by another program, such as Jamie Zawinski's webcollage. In this mode, no window is displayed; images are captured and saved in a temporary directory, and their names written on standard output.

-m number -- In adjunct mode, silently drop images if there are more than number in the temporary directory. It is assumed that another process will delete images which it has processed.

-x prefix -- The filename prefix to use when saving images, by default ‘driftnet-‘.

-s -- Attempt to capture streamed audio data from the network, and either play it or, in adjunct mode, save it in files. At present this only works with MPEG data.

-M command -- Use the named command to play MPEG audio data. The command, which is executed using the shell, should accept MPEG frames on standard input. The default is ‘mpg123 -‘.
filter code

Additional filter code to restrict the packets captured, in the libpcap syntax. User filter code is evaluated as ‘tcp and (filter code)'. 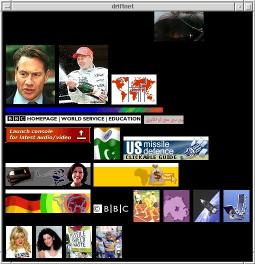