The NetBeans IDE is an open-source, fast and feature full tool for developing Java software. It is standards compliant and runs on any operating system where a Java Virtual Machine is available.

RequireJS Support
AngularJS navigation via hyperlinking from view to controllers.
Many enhancements for AngularJS in code completion between artifacts, such as code completion in the view to properties defined in controllers.
Code completion support in Knockout templates.
New editor support for creating JQuery widgets and plugins.
Debugging of JavaScript code executed in Nashorn (JDK 8+) script engine is supported.

Enhanced flexibility in the Window System, such as split of editor via drag and drop, and a new API to customize editor tabs.
New design of user interface for managing Project Groups.
Files in folders can be sorted by extension.

You need to download the latest version binary from here

Once you have.sh file you need to change the permissions using the following command

You can start the installer using the following command

This will start the installation and follow the on screen instructions 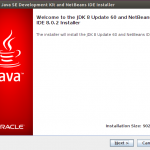 Run the following command from the installation directory