Google Music Player will be renamed to Nuvola Player since next release.Google Music Frame runs Google Music web interface in its own window and provides integration with Ubuntu (sound menu and notifications). It also remembers last session and the current view (album, genre list, ...).

Note:- This is still in beta version

open the terminal and run the following commands 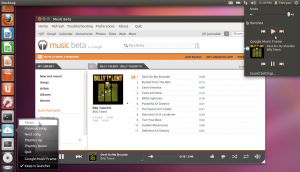