Canonical has lifted the curtains on some ambitious plans to reinvent the GNOME panel. The changes, which could potentially debut in the next major version of Ubuntu, will help simplify the desktop user experience and clean up superfluous panel clutter. Although the proposed changes look very promising, getting third-party application developers to integrate with the new panel functionality could prove challenging.

Canonical has been working on an incremental panel overhaul under the umbrella of its Ayatana desktop enhancement initiative. The company introduced a number of experimental changes to the GNOME panel in previous versions of Ubuntu. These changes include the messaging indicator applet and instant messaging status menu. Ubuntu 10.04, which is scheduled for release in April, will take this tinkering to the next level with a more holistic overhaul. Canonical plans to produce a new messaging status interface for the panel called the Me Menu and also aims to replace the icon notification area with a more modern streamlined menu system.

The underlying technical design of the notification icon area replacement is based largely on KDE's Status Notifier specification. The KDE community recently submitted the specification to the FreeDesktop.org interoperability project with the aim of making it a desktop-neutral standard. Canonical views the nascent specification as a promising alternative to the current notification area and has elected to adopt it rather than starting from scratch. The company's desktop team is actively developing a GNOME implementation of the specification. It will be used in Ubuntu 10.04, but they hope that it will also be adopted by the upstream GNOME community.

Ted Gould, a software engineer at Canonical who played a major role in developing Ubuntu's messaging indicator menu, wrote a blog entry this week to describe the scope and intent of the new status notifier project. The goal is to completely replace the current notification area panel applet, which is also sometimes referred to as the system tray.

The second part of Canonical's grand plan for panel perfection is a concept that the company calls the Me Menu. Based partly on Ubuntu's current presence applet, the new Me Menu will serve as a one-stop shop for configuring messaging status and social networks. Designed by Ubuntu founder Mark Shuttleworth himself, the Me Menu is expected to be one of the highlights of Ubuntu 10.04.

Both IM and broadcast accounts set up 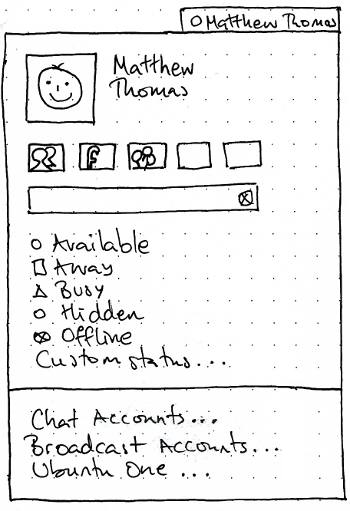 Much like the current presence menu, it will offer tight integration with the Empathy instant messaging client, allowing users to control their status and availability settings. It will also integrate with the Gwibber microblogging client to make it possible for users to post status messages to Twitter, Identi.ca, Facebook, and other services directly through a textbox in the Me Menu. Another major goal of the Me Menu is to provide a single access point for account management. The user will be able to use the menu to launch account configuration for Gwibber, Empathy, and Ubuntu One.